I just arrived this week back home from my last visit to Berlin, attending to this year's editions of re:publica and the Global Innovation Gathering (GIG) Network annual meeting. This is my second year in both events and again it was a reinvigorating experience. Here some comments about it.

re:publica had its usual packed program with talks, workshops, meeting and actions. If you go to the events related with your themes of interest, you'll find that the activities and discourses resonate with stuff that you already know, with some distilled new insights from devoted practitioners. For example, I was surprised by how gendered technology takes dangerous, invisible, but common forms, like all popular limitedly "smart" but submissive assitants (Siri, Alexa, Cortana), only having female voices. Also finding clever critical readings about "cancelling the apocalypse" and co-designing the future, as reported by Lisa. But the important opportunity that re:publica offers is the one of face to face connection and serendipity.

re:publica is becoming an important platform for South+North cross-pollination and for me GIG is the highlight and more visible evidence of such potence regarding serendipity and connection. Meeting again with such inspiring, committed, beautiful and clever people from different corners of the world, gives me an overdose of energy. The GIG network is becoming a place to showcase global expertise in a wide spectrum of different themes in re:publica: commons, biomaterials, data activism, visualization and storytelling, critical digital literacy and media, entrepreneurship, video games, art, electronics, wearables, among others.

^ Up | The potent GIG network, smiling.

In such wide spectrum of GIG members offerings we can find different aesthetics and callings: some of them take the form of pretty crowded and visible talks and workshops, kind of a performance working on the present, others are small, building also on small actions that document and open the future, others take the form of an installation and become kind of personal. All of them are trying to start and/or spread a conversation and some leave long lasting artifacts. 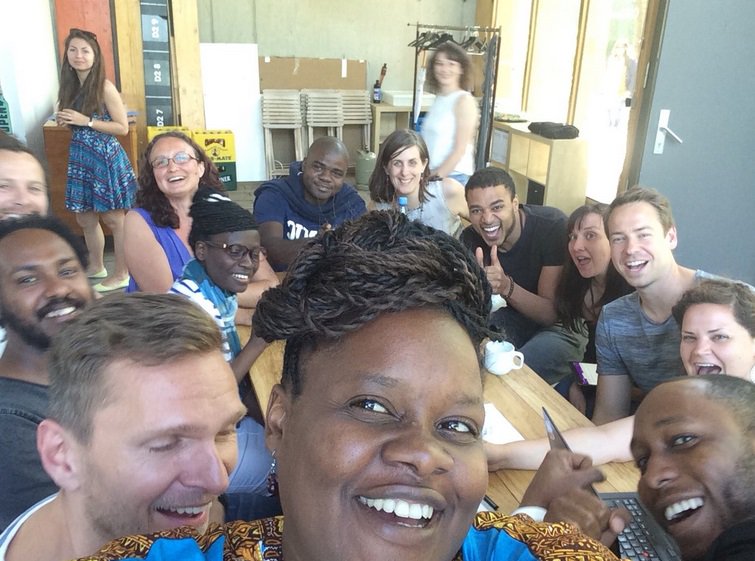 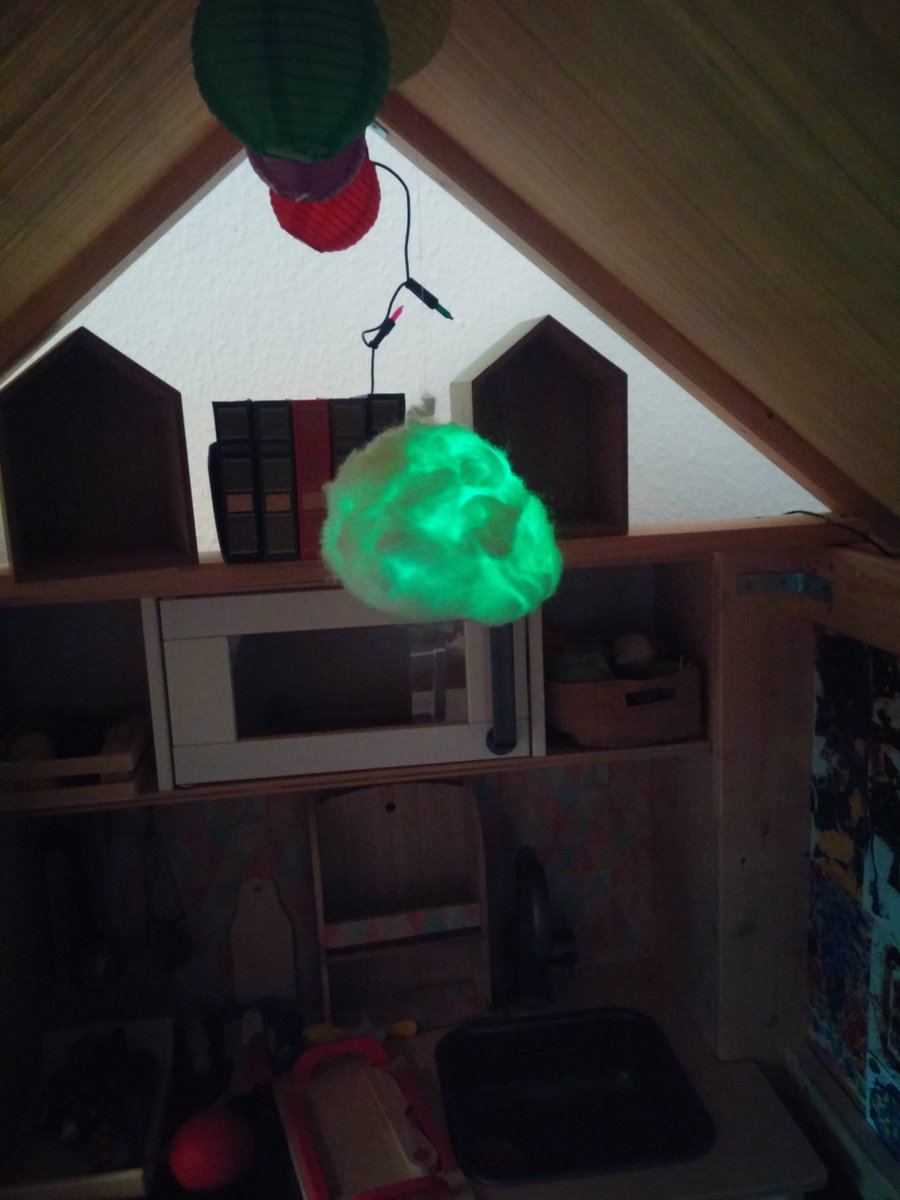 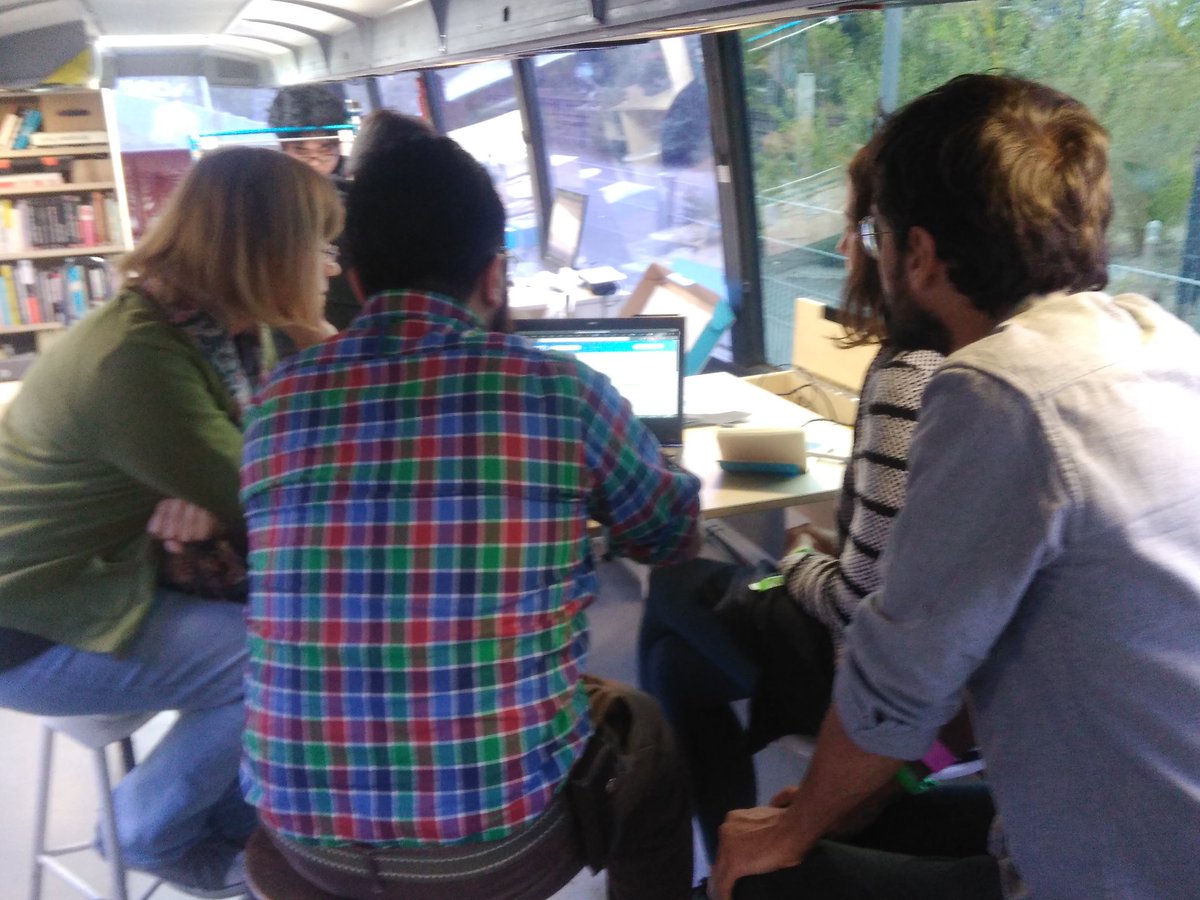 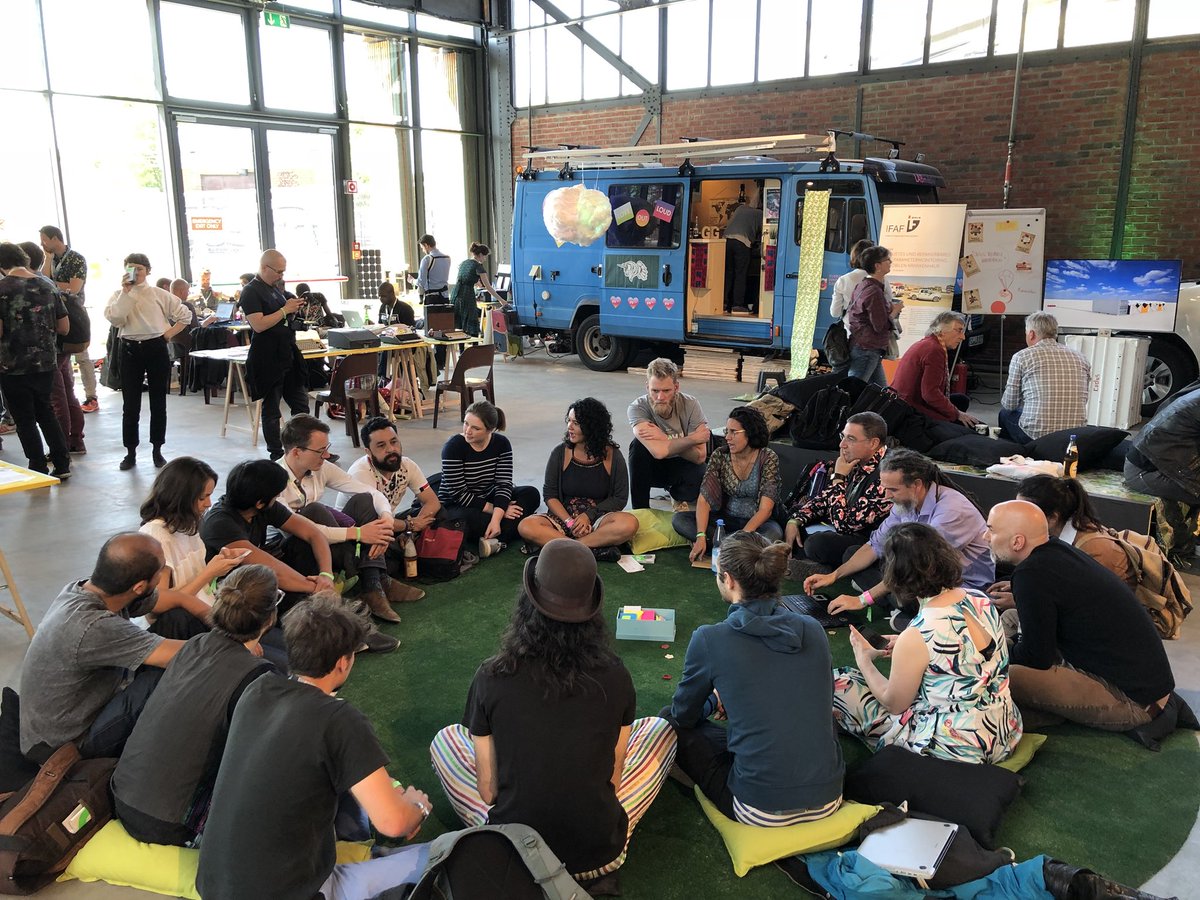 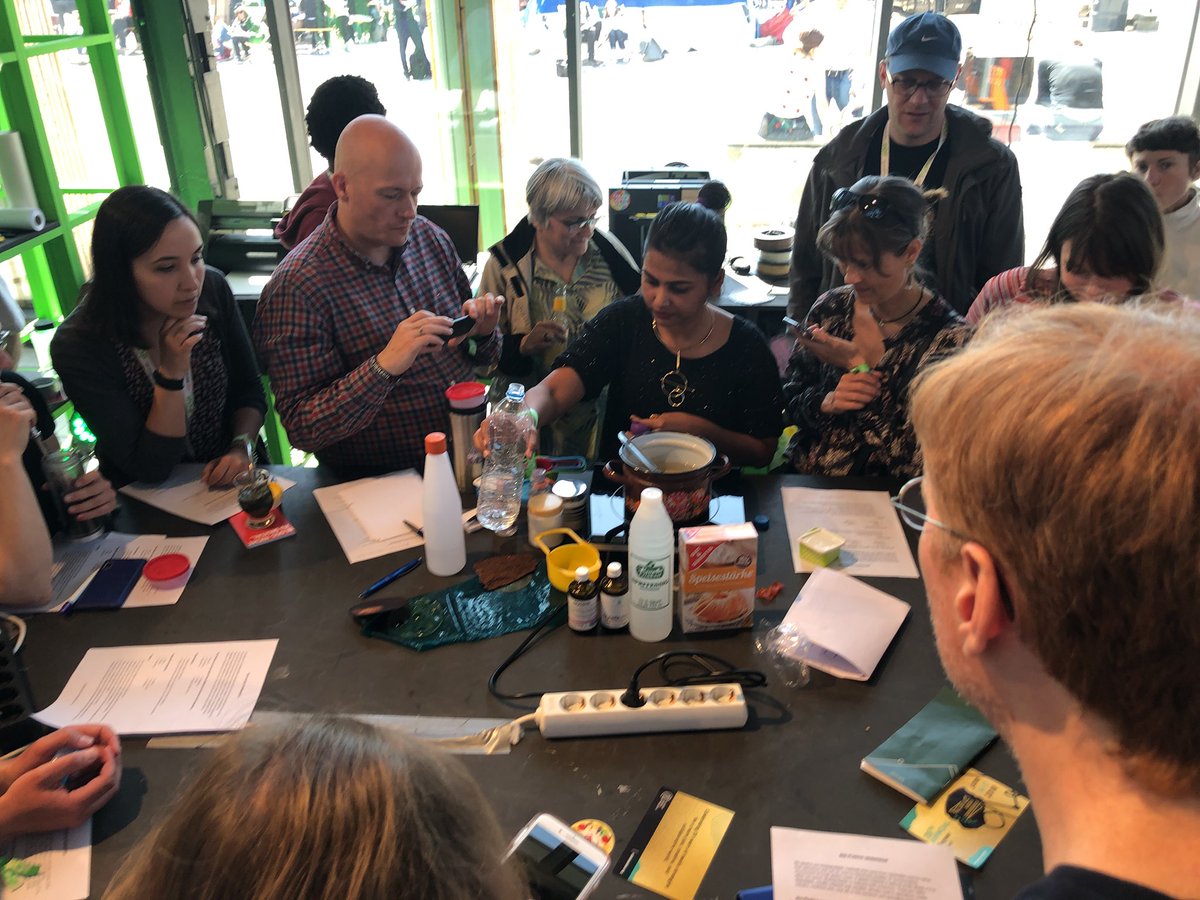 ^ Up | Some of the different aesthetics of the experiences, places and artifacts created and shared by the giggers (members of the GIG Network). Click on each image to see the enhanced context or follow/visit @WeAreGIG for even more information.

But there is even a lot more of tacit knowledges, practices and tensions, that can not be shown in the time and space constrains of re:publica. This explicit and implicit facets of GIG are the core of the formal activities of our annual meeting, where we deal with ways of making the network stronger and better connected and this is taking the form of specific ongoing projects, like Careables, and planned experiences between network peers, being them geographic ones, like South+South exchanges, or (inter)thematic ones, like groups around data, or around hackerspaces and education.

In the meanwhile, we are trying to get the network best articulated, with infrastructures that connect us better. Last year, Pawel and I prototyped Gigapedia, a personalized wiki that could serve as our organic semistructured data base. We explored two complementary paths: Pawel worked with Mediawiki, the wiki engine best known for Wikipedia and I used DokuWiki, which is simpler. None of the default wiki engines worked for the GIG needs, so we started some extensions and customizations. Because I was in such overdose of energy after last year GIG, I ended reviving a long dormant project (from 2013) and recoding it from scratch, to create a distributed resilient Content Management System (CMS) for open data, called Brea, that could work as Gigapedia infrastructure. But life happens, so Pawel and I stopped our prototyping and went back to routine.

^ Up | User inteface and functionality prototypes with their source code, developed by me for Gigapedia in a energy rush after 2017's GIG meeting. This started with a customized version of the DokuWiki engine and then was generalized as a distributed resilient Content Management System, for open data called Brea. Now they are part of the "latent repertoire of solutions" of the network, to be developed/applied if the future needs something like that (is pretty sure that locally we will have some uses for Brea). Click on each image for zoom or more details.

The lessons learned help in our new approach. Vilal provided us with a quick Airtable data base that, instead of taking several weekends, (like previously mentioned prototypes) was ready by the end of the re:publica week and now we are recollecting the GIG members, projects and spaces data on a voluntary basis, with usual and clever questions that help to map ourselves and to create exchanges between giggers. I think that after data collection, I could help with data connection (once I finish writing my PhD dissertation, this semester) starting with some visualizations of the data at the beginning, and then exploring a more complex idea of capturing the signal that giggers produce in their "natural" place (source code repositories, web sites, app stores, etc.) and routing it to the places where we already meet (mainly popular messaging applications and social networks).

For me, the important aspect is to start with informal and organic exchange of practices and techniques between members and spaces of the network. Some of this exchange will happen again in face to face meetings and internships. But we need to improve some way of agile documentation also, between our annual meetings, using light markup languages and wikis, podcast, videos and different materialities that can account for the powerful diversity and commitment in the network. Some of those future internships are being prepared and the present agile documentation practices are already happening, but I will not give any spoilers yet. Just follow the GIG channels, like our Twitter account, to know the advances on that front.

All this actions, strategies, infrastructures and meetings, consolidate the network and that should be its main objective. I don't believe in the solutionist approach where technology will fix everything, and I don't think that the network should "provide solutions", because in a complex world, problems and solutions are dynamic. I think that the network should provide itself to its members, the external communities, and interested parties, mainly by helping into building the commons for a shared complex world, because a diverse set of repertoires is the key to deal with uncertain futures and people's diversity and commitment are the main values of GIG.

I would like to close with a final comment, on how body language, with a lot of hugs, smiles, cheek kisses, and dancing, is in "common trade" between giggers. It's a shortcut over our geographical, cultural and language diversity to tell and remember us constantly how we care about each other and the world, how we enjoy our shared presence, how we are what we do together. That's why saying "good bye" is particularly difficult, specially when you see giggers dancing happily at the final re:publica party. Is not that you see them in slow motion while music fades and voice over talks sadly. But, deep inside, we know that the last hugs are coming, and we will say "until next year, safe travel and thanks again", counting on some luck and commitment to be together one more time in next annual meeting. And some of us share this feeling of being energized and melancholic at the same time. So, I have created kind of a personal therapy against melancholy, that consist basically in spending a week more in Berlin, with friends and some remaining giggers, learning about sound and open hardware, or just talking, walking, having dinner and enjoying ourselves once again. Seems working so far: melancholy is lower and inspiration remains.

Interesting times are coming. Thanks for all this.